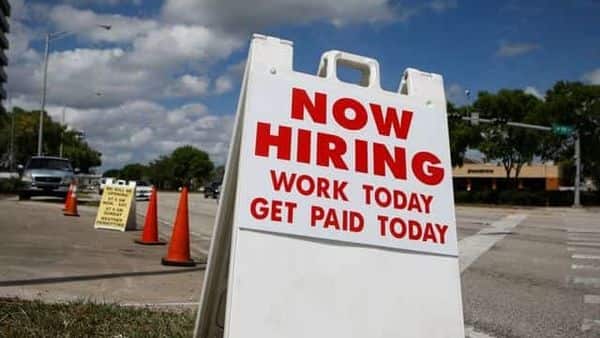 Economists surveyed by The Wall Street Journal expect that 750,000 workers filed for unemployment benefits for the week ended Feb. 27, a slight increase from the prior week and above pre-pandemic levels.

Weekly jobless claims filings—a proxy for layoffs—fell sharply last week and have trended downward since an early year peak of over 900,000 at the beginning of January. However, they remain above the pre-pandemic peak of 695,000.

Still, Mr. Sweet said the overall outlook is improving, as virus cases decline and vaccines are more widely distributed. Some states are also easing restrictions. New York on Wednesday said it would ease Covid-19 restrictions on the size of sports and entertainment gatherings, and Texas on Tuesday said it would end a statewide mask mandate.

There are several signs the recovery could be picking up after a winter lull. Economists expect February’s employment report, to be released on Friday, to show modest job gains. A January boost to household income from the most recent round of government stimulus indicates the U.S. could be primed for a rapid rebound later this year, when consumers are expected to spend some of the savings they accumulated during the pandemic. Hiring is also picking up in some industries, with the number of help-wanted ads returning to pre-pandemic levels.

The four-week average, which smooths out volatility in weekly jobless claims, fell to 807,750 last week, its lowest level since early December. Two factors that could be affecting the weekly totals include disruption from winter storms in February and attempted fraud filings. Ohio, for instance, has adjusted recent claims totals after suspected fraud created a spike in claims filings.

Jan Riggins, general manager and regional development representative at Express Employment Professionals offices in Fort Worth, Texas, said things have been “a little chaotic” for local businesses since the winter storms, with some companies scrambling to regain lost production and others still below normal operating levels.

Recruiting also slowed while potential job seekers dealt with burst pipes, school closures and other effects from the storms, Ms. Riggins said. Though some grocery store shelves are still empty, businesses are ramping back up. “I think we’re definitely going to see the end of it soon,” she said.

Layoffs have persisted despite recent signs of labor-market improvement, with jobless claims remaining elevated since the pandemic hit last March.

Best Buy Co. laid off workers and cut hours for some store employees in recent weeks, as the electronics retailer shifted its operations to fulfill demand for online orders. United Airlines Holdings Inc. and American Airlines Group Inc. have told thousands of workers there could be layoffs next month if lawmakers don’t complete a proposal to extend aid to the airline industry. And Newport News Shipbuilding, a division of Huntington Ingalls Industries, in February announced layoffs for 314 workers and demotions for 119 managers.

Newport News Shipbuilding spokesman Duane Bourne said the layoffs were part of a broad business reassessment and not pandemic related. “Reducing our workforce is necessary to control costs and improve efficiencies to secure the future of our shipyard and the affordability of the ships we build and maintain for the U.S. Navy,” he said.

Some people are finding work after losing their jobs earlier in the pandemic. Gabrielle Lencioni, 24 years old, said she recently accepted a position in the Chicago area as a supply-chain analyst at a food manufacturing company after losing a job last July at an oil-and-gas company.

“I didn’t think I would be making a pivot so soon, and I ended up moving into an industry I hadn’t even considered when I was in college,” she said. “But because I was open to it and just put the application out there, it ended up working out.”

She filed for unemployment benefits last year, using the money to cover rent and car payments while looking for work. She said she applied to about 60 positions, a number she kept track of on a spreadsheet, and has one friend who applied to more than double that number.

This story has been published from a wire agency feed without modifications to the text.